In the Central Park of the town of Gyumri, once called Alexandropol after the Czar, and still referred to as “Leninakan” by most locals, across the gorge from the Russian military garrison, and down the hill from the town’s Ferris wheel, is a small, square building with “Attractions – Games” written on the outside. Inside the building are a dozen Soviet-era arcade games and attractions. Give the middle-aged lady who works there 100 drams-worth about 30 cents, and she’ll give you a Soviet 15 Kopek coin, enabling you to travel back to 1987 and experience the best in Soviet entertainment technology.

Today, a father and his young son are the only other people in the arcade besides myself and the attendant. The father helps the son shoot targets in “Snayper-2,” a target shooting game, then the boy challenges me to race him. This is the only true video game in the room. I control one little car at the bottom of the screen, and the son controls another other. To move the car, I twist the wheel. I have to fully spin the wheel to move the car across the screen. I avoid hitting other cars on the road, and when I crash into them the little 16×16 pixel drawing representing my car goes red and gets a broken wheel. As we’re getting to the end of the race, the screen goes blank. The machine hasn’t malfunctioned-electricity has gone off in the town. 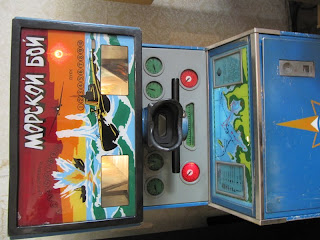 “Morskoy Boy-Water War,” a submarine simulator
Sam is an American Peace Corps Volunteer who lives and works in Aragotsotn Marz. This piece originally appeared on his blog: www.heyamerikatsi.com The views and opinions expressed are his personally and do not necessarily reflect those of the U.S. Peace Corps.