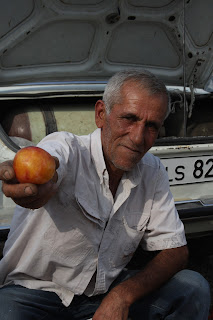 On one of the last warm weeks of summer, I was biking uphill on a country road, standing on the pedals of my steel-framed mountain bike when a car pulled alongside me.  It drove uncomfortably close for 10 or 15 seconds, then the front passenger window began to roll down.  I stopped, dropped my feet to the ground.  A hand came out of the passenger window.  It had a perfectly ripe peach in it.  I took the peach. “Shnorakalutsiun” [Thank you] I said.  The car peeled away. I ate the peach.  It was delicious.

Fruit is a very important part of life in Armenia.  Any halfway decent host will put out a plate of cut fruit for a guest.  The pomegranate and the apricot are celebrated as avatars of the nation, considered to be a superior breed to any pomegranate or apricot anywhere else in the world.  During Soviet times, under the command economy, Armenia was considered to be the Soviet republic best endowed with fresh produce rare in stores in Kiev, Leningrad or Bishkek.  Today, with the exception of bananas and oranges, most fruit in Armenia is locally grown and eaten only when it is in season.  Outside of Yerevan, the country does not experience the “miracle” of modern produce supply chains.  There are no strawberries in November, flown in from New Zealand or avocados from trees in California for making Guacamole for New Years parties.  Indeed, during the winter, there’s barely any fresh fruit for villagers in rural areas, except for in jams or at high prices in supermarkets in the cities.  But come the spring….
The first, and most important fruit of Spring is the apricot, whose flowering in April marks the beginning of warm weather.  For months, the quality of the apricot harvest is a topic of discussion at every dinner table.   Was there too much rain? Too little?  This spring, my region saw a wave of hail which devastated the crop, causing a depression almost as acute as if a relative had died.  The loss is not just culinary, it’s economic.  For a farming family, a strong apricot crop means enough money for heat, food and clothes in the winter.  During those middle weeks of April, when the trees are covered in white blossoms, the season seems full of possibilities.  They come in towards middle of June, and quickly progress from green and hard to yellow-orange, astonishingly sweet and soft and oozing sticky juice.  After eating them (it’s really no problem to eat 8 or 10 at a setting), the seeds are cracked with a heavy rock to reveal a brown nut that tastes almost, but not quite, like a moist almond. By the middle of July, the apricots have become overripe and are boiled down for jams and juices.  By August they are all but gone. 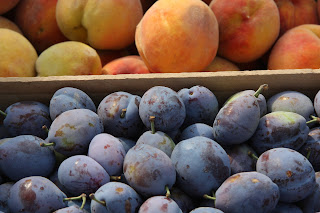 The first apples and plums will start to appear after the apricots, and will be eaten for the excitement of fresh fruit.  But these are rather poor, sour, green fellows.  Still, children will pick them and eat them for the thrill of it, enduring pursed lips and sore tummies.  They won’t reach their peaks until August and September, when the apples will be abundant, firm and fat and the plums will be deep purple and incredibly sweet, exploding with juice once their smooth skins are pierced. Sunflower seeds are chewed year round, but at the beginning of summer entire sunflowers are sold and the seeds can be eaten fresh.  Of course, they must be checked to make sure that a little caterpillar has not burrowed into the shell, eaten the seed and decided to make it his home.
The middle of summer belongs to the peach, the best of which are sweet and juicy but somehow don’t quite compare to the apricot.  It’s also when the best vegetables appear; cucumbers, tomatoes, eggplants, green beans, red, green and hot peppers.  Lettuce is rare, but cabbage is common, usually made into slaws or soup.  The standard Armenian “salat” more closely resembles what Americans think of as a “slaw,” consisting of shredded vegetables with some small pieces of meats or fruits in mayonnaise.  But fresh cucumbers and tomatoes are a part of every table, along with a knife for diners to slice them. 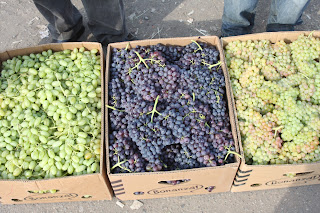 As summer starts to turn to fall, grapes are harvested, another opportunity for farmers to make money by selling to wine factories.  The manufactured wine in Armenia suffered terribly during Soviet times and remains of marginal quality.  But the homemade wines poured into plastic Coca-Cola and Fanta bottles and kept for private consumption, shared with the neighbors or sold on the sides of the road make an excellent social lubricant. At this time, walnuts begin to fall off trees in green fleshy pods and are roasted to keep for the winter.  I was also given a bag of pears so delicious it made me want to cry.
Now, as fall turns to winter, the Pomegranates are the last of the fresh, fleshy fruits to be harvested.  They will remain in markets at least until December, when they will be the size of a baby’s head and grace the tables for “Nor Tari,” (New Years).  Between New Years eve and Armenian Apostolic Christmas on January 6, Armenians set out tremendous platters of food, including great plates of dried fruit and sujuk, a string of walnuts dipped in jam and hung to dry.  Neighbors take the time to socialize, going from house to house and eating a bit at each one.  The country then settles in for the winter, mostly staying home and keeping warm during January, February and March.  Families rely on pickled vegetables, jams, dried fruit and most of all the hardy potato to get through these months as they look forward to the Apricot blossoms in spring.
Sam is an American Peace Corps Volunteer in Armenia.  He lives and works in Aragotsotn Marz, where he teaches English in village schools. The views and opinions expressed are his personally and do not necessarily reflect those of the U.S. Peace Corps.
A version of this post originally appeared on the Author’s blog: www.heyamerikatsi.com
Read more posts from Sam:
Starting Farmstay B&B in Armenia – Part 1
The Soviet Arcade Games of Giumri
Undiscovered Armavir Marz