The velvet revolution in Armenia began with protests on April 13, 2018, under the slogan “Take a step, reject Serzh“.
The velvet revolution of Armenia in 2018 was a real magic which happened to the peaceful and kind people of Armenia.
The reason of Armenians’ anger was the nomination of ex-President of Armenia Serzh Sargsyan to the position of Prime Minister of Armenia after he, being the President, in 2015 held a constitutional referendum in the country and transferred power to the prime minister in April 2018. 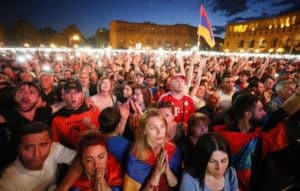 At that time Serzh Sargsyan claimed that he would never be the president or the prime minister of Armenia so that no one would doubt that he was doing these reforms for the sake of democracy and freedom.
As a result of the velvet revolution in Armenia, Serzh Sargsyan and the government resigned, opposition leader Serzh Sargsyan became the prime minister of the Republic of Armenia.
According to the head of the EU delegation in Armenia, the events can be called an ideological revolution.
As the leader of this revolutions mentions, this was a revolution of love and not a single place was left for the aggression, so the Velvet revolution won and there was not a single death!

March 31 – a two-week march to Yerevan called “My step” started from Gyumri.
April 11 – Representatives of the opposition “Yelq” party lit the flares in the meeting room of the Armenian parliament against Serzh Sargsyan as the prime minister. 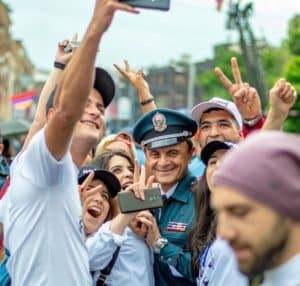 April 13 – Oppositionists and members of the “Civil Contract” blocked the centre of Yerevan and then began round-the-clock protests. A group of students announced the start of a strike.
April 14 – The Republican Party and “Dashnaktsutyun” proposed Serzh Sargsyan for the post of Prime Minister of RA.
April 15 – The protesters blocked the French Square in Yerevan and blocked Abovyan Street, where they began a sit-in strike. The leader of protest Nikol Pashinyan and his supporters blocked Baghramian Avenue and Moskovskaya Street. Later, the opposition marched down Heratsi and Nalbandyan streets right past the Armenian police building.
April 16 – Riots began near the building of the National Assembly of. The leader of the protests Nikol Pashinyan tried to break through the police into the building and he was injured. Pashinyan rejoined the demonstrators after he received the first medical aid in the hospital. 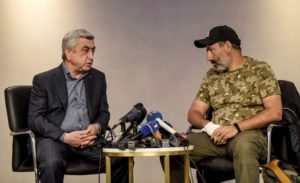 April 20 – Nikol Pashinyan called on protestors in Yerevan to a transport blockade. Simple people joined the movement and blocked the streets all over Yerevan and in other cities as well. The Zvartnots international airport was also blocked. Roads were blocked by both people and transport.
President Armen Sargsyan called on the parties to dialogue. Armenian Prime Minister Karen Karapetyan also made a call to sit down at the negotiating table. The leader of the protesters, Pashinyan, said that a dialogue with the government is possible only on the timing of Sargsyan’s resignation and the formation of a provisional government.
April 22 – at 10 am the opposition leader Nikol Pashinyan and the prime minister Serzh Sargsyan met at the Marriott-Armenia hotel. Pashinyan insisted on discussing the terms of the prime minister’s resignation, to which Sargsyan stated that the “Yelk” opposition, which Pashinyan represents, won “7-8% of the votes and has no right to speak on behalf of the people.”

Then he broke off the negotiations, leaving the meeting. In response, Pashinyan called on supporters to continue the actions of civil disobedience with double force and to gather again at 7:00 pm in Republic Square. After that Pashinayn was arrested and taken to some secret place. People were angry and they came out of their houses to fight for their rights!
April 23 – protests continued in different parts of Yerevan. After Serzh Sargsyan’s speech when he threatened people to kill (reminding of the 1st of March 2008), people could no longer stay in their houses. They came out and continued their peaceful disobedient in the streets.
On April 23, Prime Minister Sargsyan resigned, Armenian peaceful people won! And their protests seemed to be festivals, where people were happy, kind and caring!