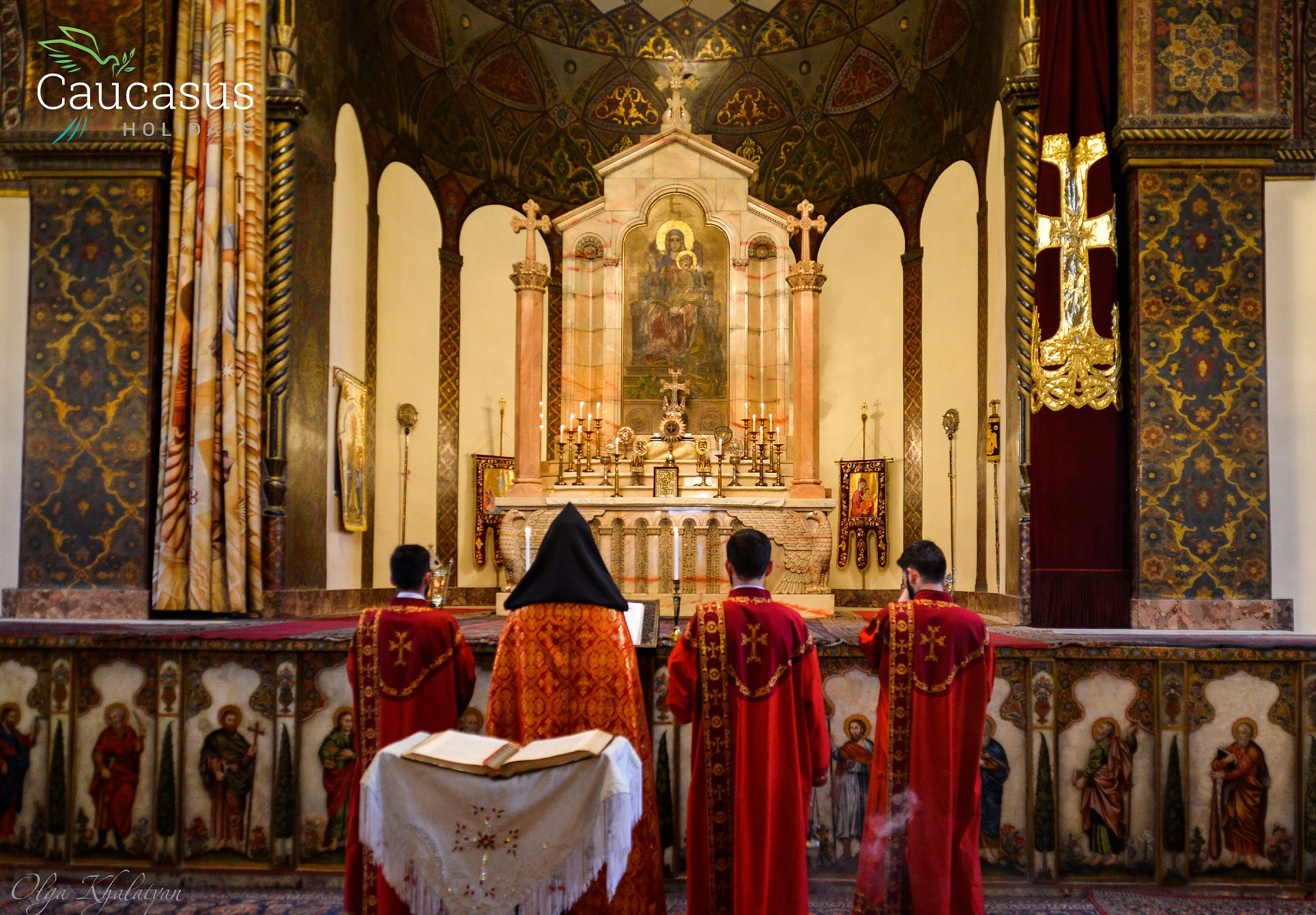 Kudos to you, if you caught the title reference of the famous book and the movie!
So, what does it really mean to eat, pray and love in Armenia?
As a country proudly serving all kinds of delicious food, Armenia has a lot to offer for every taste. As the first nation to adopt Christianity as our official religion, it should also not come in as a surprise that the country has countless ancient churches that both visitors and locals admire.
Let’s go through each of these segments one by one.

WHAT FOOD SHOULD YOU TRY IN ARMENIA?

Armenian cuisine is very diverse – some of the food is similar to the Middle Eastern dishes you may have had, some of it comes from the Soviet times, and some of it is still very unique and different from what you have ever seen.
If you like dishes with meat – try dolma. It is grape leaves or cabbage stuffed with meat, herbs and rice. If you visit in summertime, it is also common to use eggplants, tomatoes and other vegetables to stuff with meat. You can also find the vegetarian alternative with groats called pasuts dolma.
If you are into bread and dough (who isn’t?!) – try lavash. It is a thin flatbread that you’ll see on the table for every meal of the day. The bread is traditionally prepared in tonir, an underground cylindrical clay oven that is used for cooking. A lot of times people prefer eating lavash with their meals, with cheese, or even just by itself.
Looking for something new to drink? Have some tan! This simple drink is made of yogurt (Armenian word is matsoun) and water, added with some salt and herbs for every taste. To cool off the summer heat, sometimes people also add cucumber to their tan. Be aware though – Armenian yogurt is more sour, so the taste may be strange for you (strange but delicious!).

CHURCHES – DISCOVER THE SPIRITUALITY OF ARMENIA

Armenians are the first nation to have adopted Christianity as an official religion. So, it should not come as a surprise that the country has countless churches in every corner. In general, you should feel the spirituality and history preserved in the churches you visit.
Here are some of the places you should definitely pay a visit while in the country.
If you are spending some time in Yerevan, be sure to visit Saint Gregory the Illuminator Cathedral located in the city center. Compared to other churches that have been built centuries ago, this cathedral is fairly new (constructed in 2001). However, that doesn’t make it any less valuable. It is considered to be the largest cathedral in the Armenian Apostolic Church not just in the country but in the world.
With a beautiful view of Mountain Ararat as your companion, do also visit one of the most ancient monasteries called Khor Virap. Located in Ararat region, it is said that for 13 years Gregory the Illuminator was imprisoned in this monastery by King Tiridates III.
After curing Tiridates’ illness, Saint Gregory eventually became the king’s spiritual mentor and Armenia adopted Christianity as its official religion in the year 301. Be sure to take the stairs and go through the long way to the underground and see where Saint Gregory was kept for so many years.
Despite being a small country, the nature in Armenia is drastically different in each region. When you visit Vayots Dzor, check out Noravank monastery, that is located in the narrow gorge, in the middle of big beautiful rocks that make your experience even more special.
Built in the 13th century, the complex includes chapels and is most famous for its two-storey church of Surb Astvatsatsin. To go to the second floor, you can take (or rather climb) through some of the mostnarrow stairs you can imagine.

WHAT’S LOVE GOT TO DO WITH IT?

The last but most important segment to get to know Armenia and Armenians is through its warm hearted people. The country is famous for its exceptional hospitability and people will definitely invite you over to their house anywhere you visit.
If you are ever a guest at an Armenian house and you have only known them for several minutes, don’t be surprised if they instantly start throwing a fabulous dinner table made from the organic food they grow in their yards and tell you about their region over a glass of local brandy.
Armenians truly love their homeland and that love is contagious to others who visit the country and listen to their stories.
Whether you want to taste the food or have a spiritual tour throughout the country – Armenia has a lot to offer something to every traveler. No matter what time of the year you visit, Caucasus Holidays will provide an unforgettable experience, best matched to your interests!