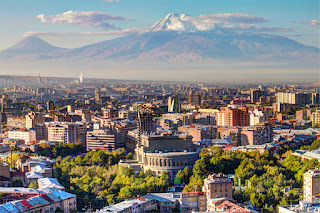 1. According to legend the Armenians are the descendents of Haik, a powefull person who didn’t want to live in Babelon under the brutal rule of the King Bel. He took his sons, grandsons, all his big family and moved from Mesopotamia to the north, to Highlands around the Mountain Ararat. But Bel decided to revenge and capture the fugitive family and came with his army to conquer Haik. The battle took place in Ararat Valley and Haik’s family beat the Bels army. It was about xx century B.C.

Since then they lived in freedom and they gave birth to a whole nation – Armenians (Armenian call themselves Hai by the name of their ancestor Haik).

2. The present Capital of Armenia Yerevan was founded in 782 B.C. The name of the initial castle was Erebouni. It is even older than the Eternal City – Rome. There were numerous nice churches and monasteries in Yerevan. Unfortunately in 30s the Bolsheviks ruined almost all of them. Church Zoravor is one of the few survivors. One of nicest Mosques in the Southern Caucasus is the

Blue Mosque in downtown Yerevan. This is a memory from periods of Persian rule in Eastern Armenia.

3. In 2001 Armenia celebrated its 1700th Anniversary of Christianity. In 301 Armenia became the first nation in the world that officially adopted Christianity as the religion of the State.   To commemorate this extremely important event of its history the people of Armenia   constructed an impressive cathedral named after Gregory the Enlightener, the person who convinced the King Trdat to turn Armenian into Christianity and later became the first Catholicos and Supreme Patriarch of the of the Armenian Apostolic Church.

4. One of the wonders in Armenia is Matenadaran. The word means a depository of ancient manuscripts. Here about 17000 manuscripts are kept under special conditions. This is one of the
biggest collections of the manuscripts in the world.  The most unique items are displayed in the Matenadaran Museum.

5. The museum complex is located at the Republic Square which is the center of Yerevan.  The Museum of History introduces absolutely fascinating archeological findings which is the material proof of the ancient history of Armenia. The Tower of the complex is the National Art Gallery. The exclusively rich collections of paintings are made by the famous French, Dutch, Italian, German, Russian and Armenian artists.

6. Sport Concert Complex is a modern building with quite an creative architectural solutions. It has two main halls and there is a rotating tribune between these two halls. Depending on       necessity it can be used either for enlargement of the Sport Hall or the Concert Hall.