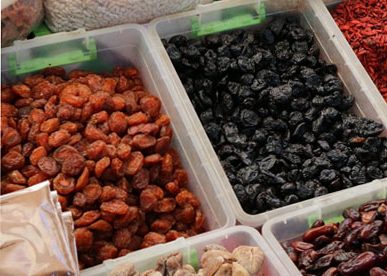 Centuries-old Armenian cuisine is complicated and time-consuming, but insanely tasty and generous. It has a lot of spiciness, spices, herbs, and pastries. And also a breakthrough of all kinds of Armenian desserts: pies, rolls, dishes of dried fruits.

We will tell you about the 7 main Armenian desserts and sweets that each guest should try. So, how can you pamper yourself during gourmet tour in Armenia ?

Gata is the magnificent cake prepared on a yeast dough and stuffed with butter and flour filling. Armenians form gata just like khachapuri or pies.

Thanks to the identical filling, nazuk tastes like gata, but differs in shape. Nazuk tastes as a puff pastry or a sweet roll. In the original recipe, nazuk is prepared with the fermented milk product matzoon, which can be easily replaced with ordinary kefir. Each layer of baking is generously impregnated with sugar and ghee. It turns out very gently and sweetly.

Green walnut jam is one of the best Armenian desserts. Whole nuts float in thick black syrup. The taste is really delicate. But this jam is valued not only for sweetness: it boosts immunity, strengthens the blood vessels of the brain and improves concentration. Also in the peel of a young nut, there is a lot of iodine, useful for the thyroid gland.

Alani is a seedless dried peaches stuffed with crushed walnut with sugar and spices. Sometimes Alani is prepared from figs, less often – from pears and plums.

The crumbly Armenian roll with nut and cream filling has something in common with Armenian baklava. The longer you hold it in cream filling, the better barurik is saturated with sugar paste.

Sujuk or Sharots is one of the traditional  Armenian desserts, viscous and nutty like Snickers. Adelicacy is prepared from apricot or grape syrup, which is called doshab. Sugar, flour, cinnamon, cloves, and cardamom are also added here. To thicken the mass, a little clay material is put in the syrup, that can only be found in the vicinity of the Armenian town of Ashtarak.

But do not worry – this will not ruin the taste of sujuk. After cooking, the doshab is carefully filtered and the clay discarded. Then, the walnut kernels strung on a thread are dipped in syrup and dried in the sun.

In addition to the bright clusters of sujuk, you can find soft multi-colored sheets twisted into rolls. This is a sour fruit pita, which the Armenians call “ttu lavash”. It is prepared from dried cornel, plum or cherry puree, but sometimes sweet fruits are used – apples, peaches, and apricots.

There is a huge list of mouthwatering Armenian cuisine which includes appetizers, Armenian desserts and sweets. If you travel to Armenia, you’ll come across the most popular desserts listed above.