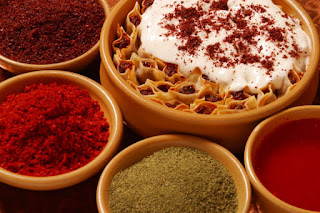 Armenian is a country rich with flavoursome and fragrant fruits and vegetables, of which its cultivation is one of the leading sectors of Armenian agriculture. Their uniquely succulent taste not only appreciated within Armenia but worldwide, can perhaps be attributed to Armenia’s favourable climate and the purity of its water sources.
Armenian cuisine is one of the oldest in the world. The cuisine is rich in both vegetables and meat and incorporates an extensive use of various herbs and spices. It is said that Armenians chefs use over 300 various types of wild flowers and herbs as seasoning. The most popular Armenian dishes are presented below.
Tolma
It is almost impossible to image an Armenian meal with the absence of meat, especially Tolma. This
flavoursome meat dish is really a must for one who wants to experience local dining. There are several variations of Tolma in Armenia. One of them being prepared from minced meat wrapped in grape leaves -which is almost always served with garlic yoghurt. The second most popular alternative is “Summer Tolma” where minced meat is wrapped in cabbage leaves or used as stuffing inside various seasonal vegetables such as eggplants, green peppers and tomatoes. During the preparation process, one can smell the aroma of succulent fresh vegetables along with all the famous herbs and spices which are infused as part of the filling.
Jengyalov hats
Within the eastern enclave of the Armenian highlands, there is the region of Nagorno-Karabakh, a place famous for its picturesque landscapes and appetising cuisine. Amongst its various local recipes, its most famous would be “Jengyalov hats”, a must for anyone travelling to the region. Namely a bread dish, it constitutes 21 various types of green leafy herbs, finely chopped and used as a filling inside a thin layer of home made bread. The bread is baked on the burning hot brazier named a “sadj” and is tastiest when served hot, straight from the sadj! The preparation of “Jengyalov hats” has become an established gastronomical tradition over many centuries, gathering all of one’s relatives to be involved in the preparation process.
Lavash
An Armenian meal cannot be complete without bread. Armenia is famous for its production of a particular type of bread, namely “Lavash”, which dates back centuries. “Lavash” is currently listed on the UNESCO world heritage register. This famous bread takes form in a very soft, thin and unleavened appearance baked in a special oven, the “tonir”. “Lavash” bread is paper thin, and can be used as a wrap for anything starting from cheese to fruits. However if you care to try one of the more traditional Armenian sandwiches, one might suggest adding some white cheese along with various greens such as coriander, basil, parsley and tarragon.
Gata
Gata is one of Armenia’s famous pastries. Much like the abovementioned “lavash”, Gata is also baked in a “tonir”. It can be best described as a doughy pastry stuffed with butter and sugar, and sometimes crispy on the outside. In the preparation of Gata, Armenians use a fairly simple array of ingredients however this particular dessert can also be transformed into small unusually delicious cookies. Puff pastry is first prepared, which is then greased with butter and sugar. The dough is then rolled and cut into smaller pieces, and the result – small, soft cookies that melt in your mouth!
Barbecue or “Khorovats”
Armenian barbecue, or best known as “Khorovats” is one other Armenian national food which one must taste upon their visit to Armenia. Khorovats is usually served with grilled seasonal vegetables. It can be said to be one of the favourites of Armenians in the region. Barbecue is of course a meat dish which is well known in all regions of the world, however however the Armenians have a unique way of preparing their own “khorovats”. In Armenia, traditionally only men are involved in the preparation process of this barbecue dish. They are expected to purchase all the necessary products prior, and furthermore prepare the special marinade for meat. Another national peculiarity is a vegetable side-dish prepared from tomatoes, eggplants, and green peppers which are roasted on the fire and then served with the “khorovats” meat.