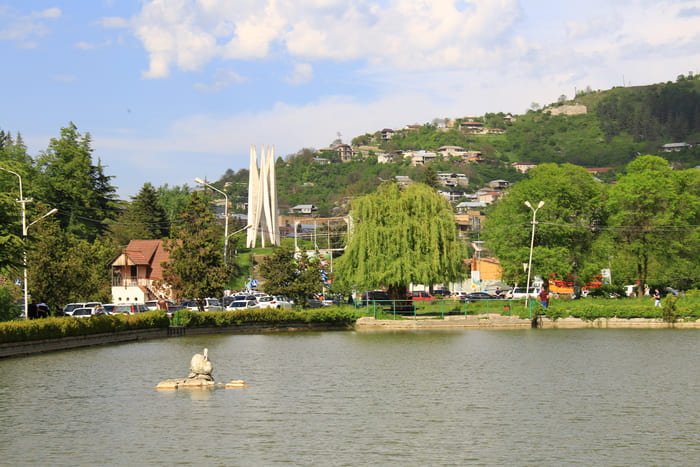 The resort town of Dilijan is located in the valley of the Aghst River, surrounded on various sides by the mountains of Bazum, Pambak, Murghuz and Aregun. Armenian Switzerland, small Switzerland, these names were given to Dilijan by foreign visitors. And it is justified․ The mountains covered with lush forests and alpine meadows seem to have taken Dilijan into their own hands, providing its mild climate – cool mountain-forest summers, abundant and warm winters. The clean and healthy air, the eye-catching forest from all sides, forever enchants anyone who visits this green city. 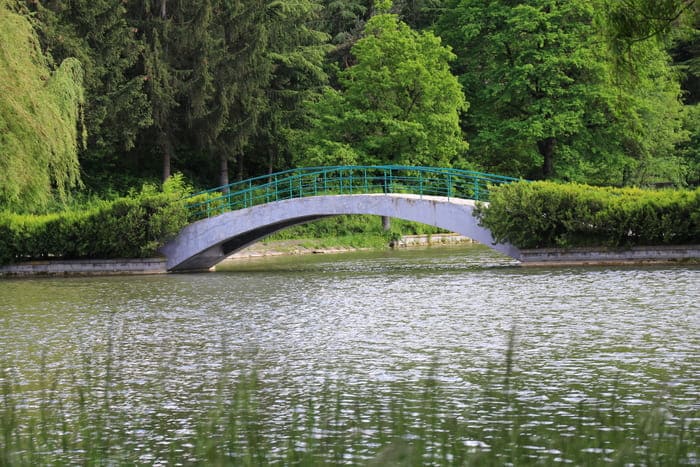 The area of ​​Dilijan, according to archeological studies, is a Late Bronze-Early Iron Age settlement (end of the 2nd millennium BC – beginning of the 1st millennium). Most of the finds are kept in museums in Moscow, St. Petersburg, Tbilisi and Yerevan, and some in the Dilijan Museum of Geography. The date of foundation of Dilijan is not known, it is only known that in the 4th century that area was the recreational place of the Armenian kings. In 1850s during the construction of the Armenia-Georgia road, in 6 km from Dilijan, on the banks of the Aghst River, an ancient mausoleum was accidentally discovered, named Redkin Lager (Redkin Camp) after a Russian construction engineer. Excavations were carried out for the first time in Armenia at this place, where finds of the 3rd-1st millennium BC were found: bronze and iron weapons, unique jewelry, horse bridle, many clay pots, etc., which are kept in the Dilijan Geological Museum-Gallery, as well as in the Hermitage of St. Petersburg, Russia, in the history museums of Armenia, Azerbaijan and Georgia. The architecture of Aghst valley has a special place in the centuries-old culture of Armenia, with its medieval secular and religious structures, castles and monastic complexes. In the 11th-14th centuries, architecture, writing, frescoes, khachkars and bridges flourished here. Famous medieval scientists Mkhitar Gosh, Khachatur Taronatsi, historian Kirakos Gandzaketsi, religious, public figures, architects and khachkar makers lived and created in the Aghst valley.

In recent years, Dilijan has changed from a resort town to a financial, educational and, of course, tourist center. Here is the educational and research center of the Central Bank of Armenia, which aims to turn Dilijan into a financial center. Due to Dilijan International School, where 190 students from 64 countries study, thanks to Ayb, Tumo Creative Technology Center, the city has become an educational center. Dilijan has been included in the world network of Learning Cities by UNESCO. Preservation of the historical color of the city, environment – old buildings, wooden houses, architectural style, creation of modern infrastructure – makes Dilijan more attractive for tourists. The once famous amphitheater of Dilijan has been restored and modernized, which was active from the end of the 19th century until the 30s of the 20th century. It was one of the favorite places of the Caucasian Armenian intelligentsia. The reconstructed amphitheater aims to revive the tradition of Dilijan residents – summer theater. The Composers’ Creative House, located in the lavish forests of Dilijan, has been a source of inspiration for world-famous Armenian and foreign artists, musicians and composers since the 1960s. William Saroyan, Benjamin Britten, Aram Khachatryan, Martiros Saryan, Arno Babajanyan, Dmitry Shostakovich, Maya Plisetskaya, Rodion Shchedrin, Valery Gergi, Galina Vishnstovsk, others enjoyed their “creative rest” here. It is said that Arno Babajanyan liked to say: “I reside in Moscow, but I live in Dilijan.” 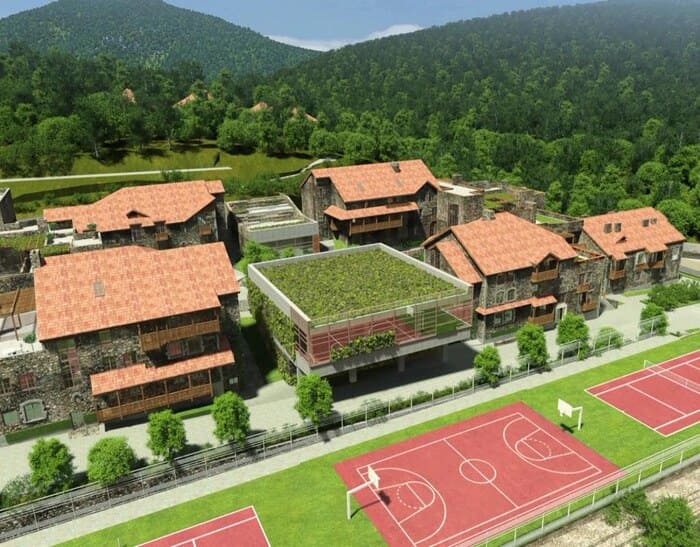 The House of Composers was founded by the efforts of a famous composer, Edward Mirzoyan, the chairman of the Union of Composers of Armenia in those years, and now bears his name. Due to the reconstruction and modernization, it is planned to restore the good traditions of this wonderful and famous creative house, to turn it into an international cultural and tourist center, where not only famous artists will visit for leisure, but also a concert in the famous “Beethoven” of the creative house. Thanks to the 30-year efforts of Hovhannes Sharambeyan, Honored Artist, Honored Art Worker, a great devotee of Armenian culture, the old street in the historical center of Dilijan, which now bears his name, has been restored. The spirit of the 19th century has been restored with wooden balconies, roofs and unique, one-of-a-kind architecture in the style of the houses. The carved wooden balconies of Dilijan have a special charm. Old Dilijan residents paid special attention to their exterior decoration, because they had to harmonize with the lush nature, which they admired every day from their balconies. Here are presented the crafts that flourished in Dilijan in the 19th century: woodworking, carpet weaving, embroidery, decoration, metallurgy, stonework, pottery. In separate workshops jewelry, carpets, wooden and ceramic items, household items, etc. are sold.

The Dilijan color is complemented by a hotel, restaurant, cafe and bakery built and designed in the same style. The initiative aims to restore the old Dilijan color, save the old Armenian crafts from oblivion, encourage their development. The delicious water of Dilijan is mentioned in the famous film “Mimino”, for which a monument with sculptures of the film’s heroes was erected here in 2011. There is some information about the origin of the name Dilijan, which remains as hypotheses. According to folklore, the settlement was named after a shepherd named Dili, who fell in love with the prince’s daughter. Knowing this, the prince ordered the shepherd to be misled in the leafy forests of Dilijan so that he could never return. The pastor’s mother cried day and night for her son, calling him “Dili, Dili jan!” 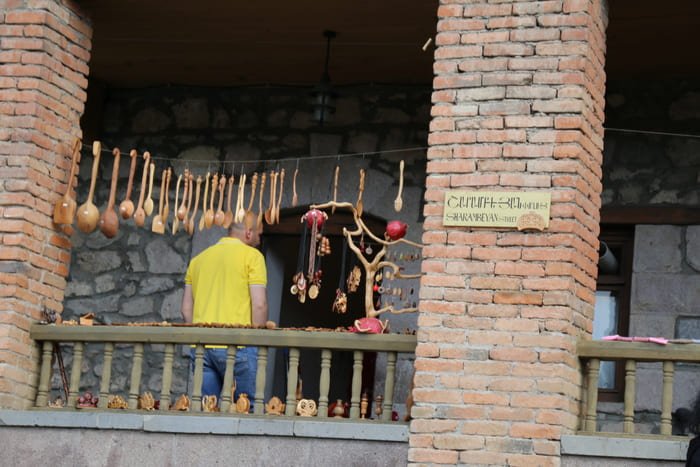 A funny story is preserved about the former name of the current Sharambeyan Street in Dilijan. On this street (from the late 19th to the early 20th century) the photographer Vysochkin had his workplace, on which was written “photography” (or “photographer”). Later the “photo” part of the word was deleted, leaving the word “графия” (or “граф”). In connection with this, the locals jokingly called this street “graph’s” (Duke’s in Russian). In the 19th century, Dilijan developed, flourished, its reputation as a healthy place spread. Many rich people from Tbilissi (Georgia) built their summer houses here. Among them was a public figure, patron princess Mariam Tumanyan. Her summer house is a two-story building with a wooden balcony in the Dilijan style, which became a gathering place for intellectuals. Hovhannes Tumanyan, Alexander Shirvanzade, Armen Tigranyan, Leon, Avetik Isahakyan, Azniv Hrachyan, Siranuysh, Hasmik and others were hosted under this floor. In 1979, on the initiative of Hovhannes Sharambeyan, Princess Mariam Tumanyan’s summer house was renovated and turned into a Museum of Folk Arts, preserving its former color and spirit of a 19th century private house. The name Dilijan, according to the preserved information, was first mentioned in written sources in the travelogues of the French traveler Jean Chardin in the 17th century. It is interesting that some people associate Dilijan with the Sevan-Dilijan tunnel (drivers will understand this well), some with the famous Dilijan turns (“pavarots” in Russian), others with Mimino’s famous expression, with water. And if seriously, Dilijan is a place of forested mountains, misty heights, “tangibly” clean air, irreplaceable place of rest, clear lakes, and unique handmade and natural, numerous monuments complete this description.

Dilijan is currently a developing tourist and resort town, where there are rest houses, hotels, guesthouses, sanatoriums, restaurants, cafes. Here is the Creative House of Composers, the House of Cinematographers. One of the largest enterprises of the city, “Dilijan” mineral water factory, has been operating since 1949. Sharambeyan Street is one of the business cards of Dilijan, and one of the favorite places of tourists. Here is the bronze statue of the heroes of the famous “Mimino” movie․ Do you remember the famous expression of the Dilijan hero of the film? “In Dilijan you open the tap, water flows, the second place in the world…”