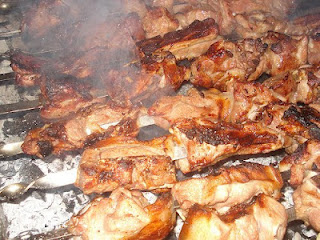 Tourists never leave Armenia without tasting famous Armenian barbecue or khorovats as locals call it. Barbecue is one of the special foods of the Armenian cuisine.
It’s even hard to imagine a wedding, engagement, baptizing, or other celebrations without having Armenian barbecue on the tables.

If you don’t eat pork, you can taste lamb or chicken barbecue, which are made with the same traditions.
Let me present you the Armenian barbecue recipe. At first you need to marinade the meat then barbecue it.

We take several chops of pork and put them in a big bowl, then add chopped onion, basil leaves, salt, red and black pepper. Mix them all together and rub the meat with hands well. Leave it in the fridge to marinade for at least 12 hours, so the taste of seasonings will penetrate inside the meat. 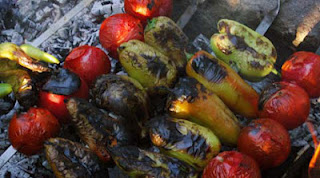 Now let’s pass to the second part of preparing Armenian barbecue. Prepare mangal (grill) and start to put the meat on the skewers. Before barbecuing the meat, սsually Armenians also barbecue eggplants, green pepper and tomato. As vegetable barbecue is ready, men line up the skewers with meat on the grill and wait until they are ready. Meanwhile, women start clean the burnt peel of eggplants, green peppers and tomatoes.

Remember, you should eat Armenian khorovats with hands, not knife and fork, yummy!!!
As your nose catches the smell of barbecue, your mouth becomes watery and you just cannot resist not tasting it.