What is Dolma (Tolma)? 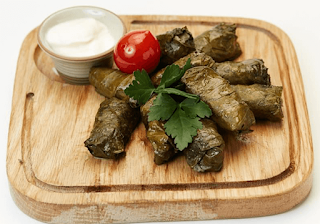 Dolma (Tolma) is a traditional Armenian dish the name of which comes from the Armenian word “Toli” which means the grapevine. Dolma consists of ground spiced lamb meat full of rice and different herbs together wrapped in grapevine.
You can also use beef, turkey or even their mix and wrap them in cabbage.

For the meat filling you will need:

Put Dolma (Tolma) in rows and put a plate on it. Then let it boil and cook for about 20 minutes. The next step is to remove the plate, cover the lid and cook until the rice is ready.

You can enjoy Dolma (Tolma) with garlic yogurt or sour cream.

Is Dolma Armenian or Turkish?

Dolma is popular in Armenia, the Balkan and Turkey. Some linguists are sure that dolma (tolma in Armenian) is borrowed from the Urartian word “toil” which means grapevine. Urartu was an Iron Age kingdom centered on Lake Van in the Armenian Highlands.

What is Armenian Dolma Festival?

How is Armenian Dolma Festival Celebrated?

During Armenian Dolma (Tolma) festival the cooks from Armenia prepare different kinds of Dolma. Festival guests can watch Armenian dances, listen to Armenian songs, and taste the amazing dish Dolma. A jury chooses the best chef by tasting al the dishes.
The winner gets a special prize a golden statue.
The traditional Armenian Dolma (Tolma) attracts people with its taste and look. So be sure to try it and enjoy the taste of Armenia.